When is an auction not an auction? When it’s a real estate auction. This was demonstrated recently when the highest bidder for a $2.7 million property refused to buy it. 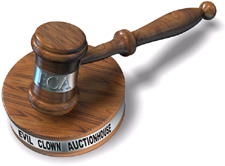 “…the sale failed to go ahead, despite the winning bidder making several bids to buy the property in front of a crowd of about 45 people.

…the Real Estate Institute of Victoria agreed there was little estate agents could do if a winning bidder did not sign a sale contract after an auction.”

Estate agents have always known that real estate auctions are not true auctions. But they still choose to trick consumers, vendors and purchasers alike, into believing that properties are actually “sold under the hammer”.

We believe that estate agents should be required by law to disclose to all consumers the fact that a real estate auction does not result in a sale. Perhaps the term “auction” should be replaced with a more accurate descriptive term such as “purchaser selection process”.

At the very least, consumers should be informed that the process is not binding on either party, and that the vendor and purchaser are both free to walk away without signing a contract.

Can there be a true real estate auction, conducted ethically and legally? Of course; but estate agents will always prefer the commission-generating fake auction.

Let’s examine this a little further.

Estate agents invented the process – and called it “auction”

According to Tony Rindfleisch, Key editor with the Sunday Herald Sun newspaper:

“A loophole in Victoria’s auction system has been exposed…”

In fact, it’s not a loophole at all. The truth of the matter is that estate agents invented this scam, and simply called it an “auction”. As every estate agent knows, a contract for the sale of real estate must be in writing and signed before it can be enforceable, and calling out “Sold!” binds no-one.

With the complicity of the lawyers and conveyancers who insert “auction conditions” into real estate contracts, estate agents have been able to maintain the myth of the real estate auction.

A process that purports to sell something, but which does not really achieve this result at all, cannot be called an auction. It’s really a mock-auction – let’s call it a “mocktion”.

Like most scams, the purpose of the mocktion is to make money for those who use it. In this case, the purpose of the mocktion is to ensure that a property generates a commission before the vendor changes estate agent. (Remember, estate agents choose to risk everything on the gamble that a property will sell while it is listed with them. If there is no sale, there is no commission.)

The mocktion is a means by which the estate agent can demonstrate to the vendor that no-one but the last person standing wants to buy the property, and it does this by quickly eliminating potential purchasers.

The order in which purchasers are eliminated by the mocktion process is as follows:

– Those who would buy “subject to building inspection” or subject to other important checks will not buy at a mocktion. This group is expanded further through the common practice by estate agents of withholding the Section 32 and Contract until the day of sale (we understand that this is to prevent buyers from finding out too much too soon).

How the mocktion is conducted

The manner in which the mocktion is conducted gives it away as a scam.

Having eliminated the bulk of potential purchasers, the estate agent sets to work on eliminating those remaining. Some will have eliminated themselves, having found another property in the lead up to auction day, and others may be attending simultaneous auctions held elsewhere. Those buyers who actually participate in the mocktion are invited by the “mocktioneer” to declare the amounts they are prepared to pay for the property.

From this group a “winner” is chosen, on the basis of his or her promise to pay a little more than the others.

At this point the mocktion concludes. Neither the winner of the mocktion, nor the vendor, are bound by the mocktioneer’s call of “Sold!”.

“Gamblers” are a problem – but not for the estate agent

We have mentioned that some intending purchasers become “gamblers”, and will attempt to buy at a mocktion even though their finance has not been arranged, or their finance is only “pre-approved”. Estate agents encourage such bravado, and will even assist in arranging home loan pre-approval through their own finance divisions.

But what happens if the gamber’s finance fails? We saw this recently when a distraught mother asked for advice on behalf of her daughter. The daughter and her partner had purchased at a mockton on the bais of a pre-approved home loan. Between sale and settlement the daughter lost her job, and the lender rejected the home loan application.

The purchaser could not proceed with the purchase, and risked losing her deposit, at the very least. But the vendor was also in strife. The vendor was required to pay the estate agent’s full commission on the sale. Further, the estate agent’s Exclusive Sale Authorityrequired the vendor to hunt down the purchaser to recover enough of the deposit to pay the commission if the vendor did not have the money to pay it. Legal action, delay, an unsold house, and runaway costs.

No problems for the estate agent, though. The estate agent knew that as soon as the contract was signed, his commission was secure.

Vendors never know if the person who has bought their property is a ticking financial time-bomb (the chances of a bank rejecting finance on the basis of an unsatisfactory valuation are high), given that the supposed goal of the mocktion is to cause purchasers to pay more for the property than it is worth at current market value.

The only comfort for vendors is the fact that most properties sold at a mocktion don’t achieve current market value anyway, so the valuation problem is probably not as bad as it may seem.

How the mocktion is conducted

The manner in which the real estate agent conducts the mocktion gives it away as a scam.

Having eliminated the bulk of potential purchasers, the estate agent sets to work on eliminating those remaining. Some will have eliminated themselves; having found another property in the lead up to mocktion day, and others may be attending simultaneous mocktions held eslewhere. The buyers who actually participate in the mocktion are invited by the mocktioneer to declare the amount they are prepared to pay for the property.

From this group a “winner” is chosen, on the basis of his or her pledge to pay a little more than the others.

At this point the mocktion concludes. Neither the winner of the mocktion, nor the vendor, are bound by the mocktioneer’s call of “Sold!”.

How the parties are tricked

Having selected an eligible person to purchase the property, the estate agent ushers him or her into the house to meet the vendor.

Usually, both the winner and the vendor believe that an enforceable sale has taken place. This false belief is reinforced by the assurances of the estate agent, and by the appearance of “auction conditions” in the contract (which, of course, has not yet been signed, and is therefore not binding on either party).

To this point there is no enforceable sale at all. The estate agent knows this, but doesn’t let on.

Is there a loophole?

The answer is no. The term “loophole” implies some sort of mistake or unintended failure of the process. The mocktion process was deliberately designed to avoid requiring participants to sign contracts, as asking for signature beforehand could give rise to difficult questions. It’s easier to lure consumers into the process, and then convince them that they have to sign.

The existing mocktion process is an important tool of trade for the estate agent. Dummy bidding, misleading and deceptive conduct, vendor conditioning, and control of the sale process are features of the mocktion, and would not be possible in a genuine auction situation.

How would a genuine auction operate?

Instead of pretending that the parties are contractually bound on the fall of the hammer, and then breathing a sigh of relief when the contract is eventually signed (and the commission secured), a genuine auction would incorporate the following features:

Removing the opportunity for deception from the process would make the mocktion process unattractive to estate agents. Thus, we’re unlikely to ever see genuine real estate auctions.

What can consumers do about the problem?

Neither Consumer Affairs Victoria nor government have any interest in taking on the real estate lobby, and so consumers have no option but to match wits with cunning estate agents.

Here’s what we advise clients who are considering bidding at auction: